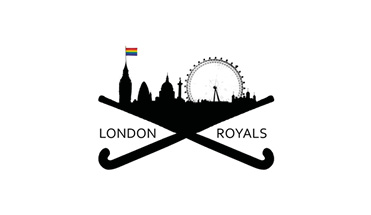 The London Royals Hockey Club is the first openly LGBTQ+ Hockey Club in the UK. We are based in Central London. With many available teams to join: Women’s Teams, Men’s Teams and Mixed Teams. Although aimed at the LGBTQ+ community we are open to all.

We have been going for over 10 years now. We have experienced coaches and cater from beginners to more experienced players with regular training sessions. Members are given the opportunity to play at a variety of competitive levels against local, nationwide and even international teams.

We are also just as active off the pitch: many sociable events are organised throughout the year and we have members who, through injury or busy lives, cannot play any longer or as often as other members but who can be just as actively involved in the club socially and voluntary roles.

International and national tours are organised each year. In recent years we have been to Miami, Amsterdam, Berlin, Leeds, Stockholm and Dublin to name just a few!