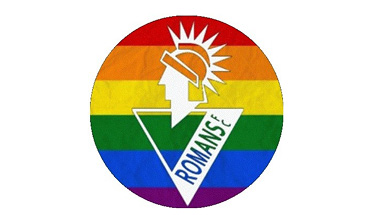 London Romans were formed in 2006 to accommodate LGBT+ players in the North London area. We welcome all players, regardless of gender or sexual orientation. We aim is to provide a safe space for LGBT players to play football either for the competition and fitness, or to socialise with like-minded individuals.

We play in the LUL and GFSN cup. We held the LUL trophy from the 2011 season right through to 2017 and won the GFSN cup in 2013 and 2017. We also regularly play in international tournaments around the world.

We have regular social events ranging from nights out on the town to wine tastings hosted by our very own coaching staff. We also believe in the social side of the league and plan after match drinks after every home game. We are lucky our sponsor The Nags Head in Wood Green provides us and our opposition hot food after all our home matches, giving us a chance to socialise with other teams.

Please come along to our Tuesday 5-a-side sessions and give us a go!